14 Habits That Can Make People Dislike You 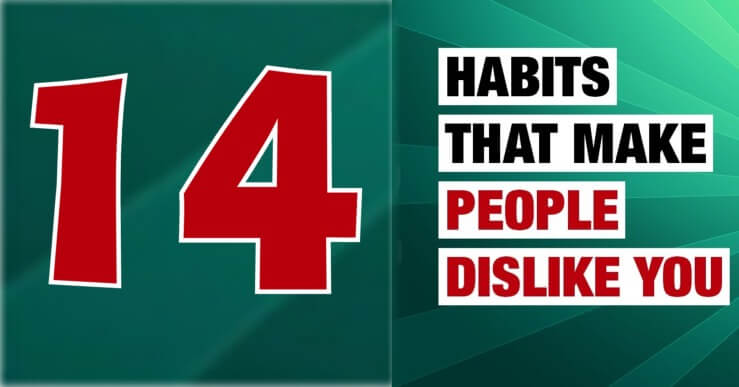 Nana Ama McBrown’s Daughter Maxin Gets 76.6K Subscribers On YouTube In Just One Week
Top 11 Ways Men Test Women
13 Things Women Do That Push Men Away
If A Man Has These 15 Qualities Never Let Him Go
Top 10 Signs That Shows You Are Mentally Strong

14 Habits That Can Make People Dislike You | There's a common belief that likability is like a talent that people who are likable are simply born with them straight but just because you might think you are not especially likable does not mean you can't do anything about it.

Your degree of likability depends on your emotional intelligence and you can work on this. Being likable not only involves behaviors you should practice but behaviors that you should avoid as well.

14 Habits That Can Make People Dislike You

In this article, we've compiled a list of habits that make people less likable, so you can avoid these behaviors in the future. Here are the 14 Habits That Can Make People Dislike You:

Most people like to be the center of attention when they are talking and one surefire way to make them dislike you is by constantly interrupting the next time someone is telling a story that you already know. Don't cut in and say that you've heard it before, let them finish!

If someone wants to tell you their problems they want you to listen, don't interrupt. People really don't like it if you are always quick to interrupt them with your own opinion. This behavior tells them that you don't value them or what they have to say.

Many people have a way of bragging while pretending to be modest, this is called humble bragging. You've heard them before:  The woman who makes fun of her ridiculous diet when she wants to draw attention to her attractive figure; the guy who complains about how terrible he plays when he wants to make you aware of his athletic talent.

Such people use self-deprecation to hide their boasting but others can see through this. This behavior is especially dislikable because they are not only bragging but they are also trying to deceive you!

Just about everyone is proud of knowing interesting or famous people but taking any opportunity to drop a name is irritating and pretentious. It is another form of bragging and is obvious to everyone. You might think it makes you interesting but it is even worse than humble bragging because you are relying on others to land your status. It also signals instant purity when you associate your knowledge and opinions with some celebrity instead of stating them as your own. It puts people off and weakens interest in any conversation with you. Your desperation for attention will turn most people off.

If you want to win friends just be sincerely friendly and polite. Others will pay you more attention and find you more persuasive. If you speak pleasantly, concisely and with confidence, you won't have to try to show them how important you are. People are sensitive to your attitude. How you express what you know is more important than who you know!

READ ALSO: 15 Things You Should Never Apologize For.

People distrust those who act too nice. It is easy for most of us to become suspicious and skeptical and people who are too nice prompt distrust because we tend to think that this excessive kindness is too good to be true. We naturally suspect that there must be some hidden ulterior motive behind this behavior. So just act naturally around people. Being nice is nice but if you overdo it people will not react in the way you hope for.

You need to realize that people are very protective of their pets. It may sound silly to you but to them, their pets are like their children. How would you feel if someone showed dislike or disrespect for your children? Besides a lot of people trust their pets' instincts if their pet does not like you, they will tend to dislike you as well.

So the next time you visit someone who has pets, remember that they are practically members of the family. If you don't care for them keep that to yourself.

This one should be obvious, I mean you wouldn't like it as someone borrowed something from you and didn't return it, right? So whenever you borrow anything no matter what, make every effort to return it as soon as you are done with it. If practical, clean the items especially clothes before you give them back and if it involves money it is even more important to pay it back as soon as you possibly can.

Letting Others Pay for You Frequently

Research reveals that 99.9% of people in a group of friends like those who never seem to pay for themselves. These are just basic manners when you go out with a group of people. You should expect to pay for yourself, any other attitude will alienate others.

Money is always a sensitive topic and no one wants to feel used. So don't cause others to think you are using them by asking or expecting them to pay for you. If you don't have enough cash to keep up with your friends' scale, back out on social outings. It is better to seem unavailable than signal that you are broke.

Too soon it's great when you can confide your feelings in people but don't overdo it and don't do it too soon. Don't pour your problems and emotions out to people. You've just recently met, wait until you have established a connection with someone until then pay attention to them. This is a much better way to make a friend who cares than unloading your problems on someone who is not ready for this. Sharing too much too soon can make new acquaintances think you are just using them and if they don't care enough for you they will seek to avoid you. Open up only to those who are ready to care for you and be willing to care for them too.

An emotional hijacking describes an instance like screaming at people making them cry throwing things and other extreme forms of behavior. This type of behavior comes across as untrustworthy and demonstrates low emotional intelligence. It will cost people to doubt your emotional stability and whether you can hold up under pressure. No matter how much the object of your wrath need to deserve it, exploding at them will attract a lot of negative attention. Nobody likes being around seemingly unpredictable and emotionally unstable people. When you are in control of your emotions you can control the perceptions others, half of any conflict you are in and if they just can't keep it together they will be the ones who look bad not you.

No one likes talking to someone who already has their mind made up about every little thing and insist on always being right. What's the point of having an open mind and really listening to other opinions? It is an extremely likable trait so don't be quick to judge others or always try to demonstrate how wrong they are. You don't have to agree with them but if you listen and really try to comprehend why they hold their opinions, they will appreciate it and they will appreciate your company as well.

Studies show that people who don't fully open their eyes can be perceived as shifty untrustworthy calculating arrogant and cold. Half closing your eyes on a date can be sexy but only when the situation in mood is right otherwise you might actually be pushing him or her away. Half closed eyes closed off your emotions. Open eyes on the other hand signal openness and openness is very likable.

Profile Pictures Are too Close Up

Online services typically require a photo of your face for your profile. This makes sense. People want to see what you look like but close-ups do have their disadvantages. Not only do they reveal minor imperfections that you'd rather not show, but they can also make you seem less trustworthy. Studies suggest that this perception is related to our sense of personal space.

People feel uncomfortable when someone they do not yet trust comes too close to them and invades their personal space even if it's only a photo. On a fundamental instinctive level, we are put off by people and photos that are too close up. It's invasive and vaguely threatening. So make sure your facial photo is close enough to clearly see what you look like but not too close.

SEE MORE: Top 10 Signs That Shows You Are Mentally Strong.

Research has found that people who share too much of themselves on social media do this to compensate for a lack of acceptance in real life. They want attention and they desire to be liked yet by doing so they actually achieve the opposite. They make people dislike them, think about it.

Would you like someone constantly telling you every little detail of their daily life? How would you feel about that person's constant need for attention? Wouldn't it get on your nerves? Sharing on social media can't allow you to express yourself and share meaningful information but you need to be prudent about it and exercise restraint.

What would you think of somebody who constantly cancels plans you've made with them? Quite irritating, right? If you have this habit, realize what kind of impression you are making. Sure, everyone knows that things get in the way sometimes but if people cannot rely on you to stick the plans why would they continue to make plans with you? Your friends will begin to think that they're not important or don't mean very much to you, so be sure to make time for people you like.

ALSO READ: If A Woman Has These 15 Qualities Never Let Her Go.

After all the best way to get people to like you is to show that you like them. Likeability is a trait we look for in everyone and one that we desire for ourselves. When those habits become part of your basic behavior, you can easily make people dislike you. By becoming aware of such habits and the effects they can have, you can take steps to avoid them and become more likable.

So do you agree with this list: 14 Habits That Can Make People Dislike You? Are you guilty of any of these habits? Is there anything else you would like to add? Let us know in the comments section below.

If you enjoyed this article help it reach others. Share it with your friends, so we can keep writing more of them. Subscribe to our newsletters/notifications to receive the latest gossips and news updates on your device as soon as we publish them.