It was earlier reported that former Stonebwoy protege Kelvynboy has been attacked unknown assailants at the launch of Electroland Ghana Limited at Ashaiman which onlookers says that the artiste was attacked Kelly, a former bodyguard of Stonebwoy and his unknown entourage which disrupted the purpose of Kelvynboy’s visit.

Burniton Music Group owned by the multiple awards winning reggae superstar Stonebwoy which housed Kelvynboy in the past has come out to debunk the allegations leveled against them after a fraction of Ghanaians suspected the attack was masterminded by Stonebwoy.

The label, in a press release, has stated emphatically that they have nothing to do with the attack as they really focused on promoting Stonebwoy’s recently released album, Anloga, and would press charges when the need be. They also stated that the label would not tolerate any form of defamation directed to the label or Stonebwoy and cautioned Ghanaians against such act as it would affect their exploits and returns.

Read the press release below 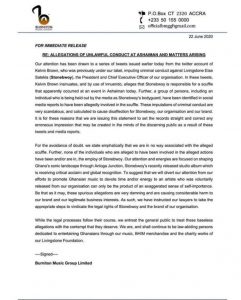 Samini Calls On Stonebwoy and Kelvynboy To Cease Fire

13 Things Women Do That Push Men Away

4 weeks ago
Prev Next