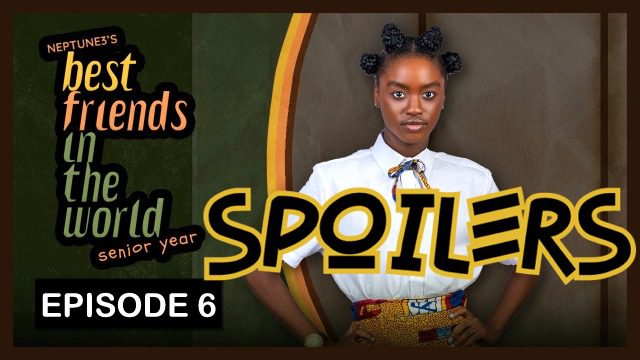 In this article, I will reveal to you some of the moments to expect in the yet-to-be-released BFW Senior Year Episode 6. Get some chill drink and ride with me as I give you the spoilers.

In the previous episode, BFW Senior Year Episode 5, things didn't look nice for Olive but eventually with the help of Esther, she was doing well at overcoming her emotions.

Maria is a very intelligent character but has been facing a lot of challenges in her life. Olive who was previously jealous of her performance is been punished for her past and this seems to be the right time for Maria will shine again.

In episode 5, Maria looks so calm and seems to be in control of all situations around her. She even visited Olive during the weekend to console her about her election loss. Well, there is another loss on the way waiting for Olive Lane.

Winning the deputy head prefect has given Irish some confidence boost which makes her feel better. In the previous episode, her action showed that she was angry Romeo wasn't celebrating her even though she won big.

It's obvious she has noticed that Romeo prefers Olive to her and she's constantly trying to prove to Romeo that she's better than Olive. Did you notice that the chase is over?

Ivy told Irish to settle this. Finally, she got Romeo to admit he had noticed she likes him but being so guilty she finds it difficult to admit it to Romeo.

She might open up in the future but for now, she is ready to play hard-to-get!

Esther has been so supportive of Archie before and after the election. She has come to give her full attention to Archie who is gradually understanding her.

She has literally been his voice since they started dating and even after the election until he found his own.

Esther deserves some accolades. In episode 6, I think Archie will finally prove to Esther he appreciates all that she has been to him. I don't know how exactly this is going to happen though.

Olive's mom Mrs. Lane has been doubting as to whom to go on a date with. She has met two people so far since episode 4 and we all know who she is falling.

In FW Senior Year Episode 6, she will muster the courage to go on a date with the bank manager at any given opportunity.

Can you remember the scene in Best Friends In The World Senior Year Episode 4 where the banker manager saved Mrs. Lane from getting scammed?

Do you remember she was given a business card by the man? Well, after finding her confidence, she will finally call and arrange a “thank you dinner”, as proposed by Mrs. Andrews, Adam’s Mother in her attempt to persuade her.

Olive has already had enough of Evelyn's BS. This is the time she is going to man up and face her squarely because this time round unlike before she lost the elections, she has nothing to lose.

Olive is going to confront Evelyn and advised her to stop her unhealthy games otherwise she would deal with her. Guess what will happen at the end? Your guess is as good as mine!

SEE ALSO: All You Need To Know About Neptune3 Studios, Producers of Best Friends In The World.

Download and Watch Best Friends in The World Episode 6

Download and Watch Best Friends in The World All Episodes

Share this article with others on various social media platforms, movie forums, and instant messaging apps.

Also, subscribe to our notifications to receive the latest updates about Best Friends in The World Senior Year and other related web series.