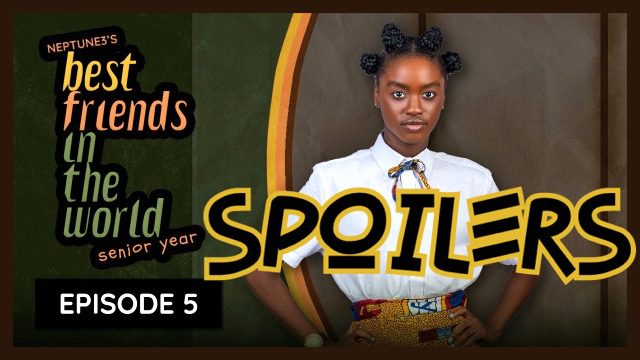 Since you are here I know you are curious about what happened or will happen in Best Friends in The World Senior Year Episode 5 but before you go ahead and read what might happen in this episode, I would like you to buckle up because things won't go the way you would expect them to.

I know a lot of you haven't already noticed this but since Evelyn arrive in the class, almost all the boys in the class seem to admire her beauty. In episode 4, it was very obvious that David is crushing on Evelyn. This was seen in the scene where they went to perform at a show.

It seems gradually Evelyn is also beginning to like him from a distance. At first, when Adam introduced Evelyn to David and the Kings, Evelyn was like “Is he always angry?”.

Now another time she said, “well he is cute”.

In BFW Senior year episode 4 we saw how David was stealing glances at her making the other members of his team notice. Anticipate and see what is about to unfold. What do you think will happen next between them?

Olive Didn't Get The Highest Score

In an earlier episode, Olive made mentioned to her mom one of her goals for the Senior Year. She said, “I want to get the highest score in ss3, that will be 6 times in a row, no one has done it before and probably no one will even after”.

In Episode 4, after their test, Olive was not confident she would pass the test and to even talk about scoring the highest. She went to meet Miss Lucille Etim immediately after the test for an opportunity to rewrite it again. Unfortunately, she was turned down.

She actually thinks she would perform woefully. I feel really bad for what’s coming to hit our precious Olive. On the contrary, Olive will pass the test but she is not going to be the person with the highest score this time. Can you guess who will take her place this time? Did you notice how prepared Mariam was in episode 4? Will she take the place of Olive this time?

Iris Opens Up to Romeo About Her Feelings

We all know Iris has been showing affection for Romeo since several episodes ago. Even though her action shows, she usually denies the fact when she's confronted by her “twin”. Do you think Iris would give up on Romeo after winning the Assistant Head Prefect position?

Iris might start ignoring Romeo but it won't last long until she comes out clean to confess her feeling to Romeo. She is always angry because, despite all the efforts she puts in to attract Romeo, he still ignores all the signs and doesn't take her seriously.

Finally, she will become fed up when ignoring Romeo doesn't work too. She would open up to Romeo about her feeling for him and guess what will happen?

Funny enough, the card might turn on Romeo as Ivy might take herself a little more serious after winning the head girl position. Is it time for Romeo to chase Iris? Or will Romeo ignore Iris and focus on Ivy instead?

SEE ALSO: All You Need To Know About Neptune3 Studios – Makers of Best Friends In The World.

During the campaign period, it looks like Olive was standalone. Esther gave her boyfriend Archie her full support while Adam had Robert and Evelyn on his side. Archie's campaign was well handled since Esther was bold and confident asking people to vote for him.

The good news was that Archie won hands down. Moving forward, Esther has always told Archie to bolden up and I think his new position as Library Prefect is going to give him that will to be bold. Being grateful, he will never forsake Esther no matter what anyone says about her.

But anything could still happen. Things could turn the opposite very fast. Archie could ditch Esther after gaining his confidence, thinking Esther is not his type because of what his cousins say about her.

Olive will finally accept her fate and congratulate Adam on his win as Head Perfect. Even though this would be one of the most difficult moments for her, she would gather the courage to do it. She might suffer some psychological trauma for losing.

It already seems like she is losing everything including her best friends and the “perfect Olive” everyone knows her to be. Moving forward she will fully recover from the pain it brings and bounces back to her feet.

Download Best Friends in The World Senior Year All Episode

After reading our predictions, tell us what you think might happen in Best Friends in The World Senior Year Episode 5. We would also like to know what you are expecting in Episode 6. Kindly leave your contributions in the comments box below.