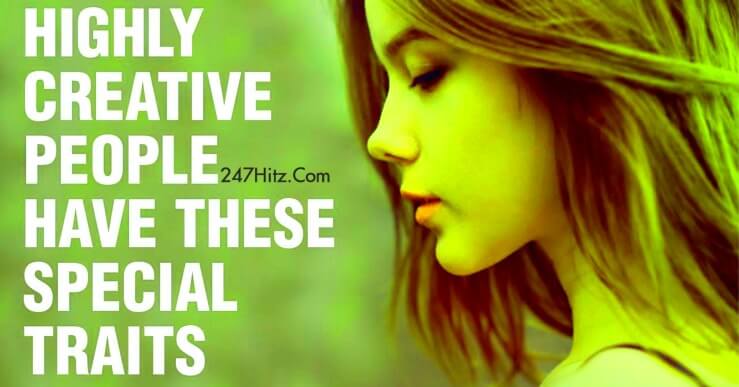 18 Traits of Highly Creative People | Highly creative people often feel misplaced in our logical, linear world but they feel different for a reason. Research confirms that their brains have structural differences that cause them to think and act uniquely.

Creative people operate on a more intuitive and imaginative level than their counterparts who seem to excel in logical, analytical endeavors. The average person may find it hard to understand a creative person’s mental process.

In fact, there are a number of different things that an average individual will most likely never understand about a creative person!

See below the 18 characteristics that any highly creative person exhibits. You would be surprised at what you are going to discover soon.

They Are Playful, Yet Disciplined

A playful attitude is one of the hallmarks of creativity, but this lightheartedness and excitement are also mirrored by a major paradoxical trait perseverance. When working on a project, creative people tend to exhibit determination and focus.

They will work for hours on something often staying up late into the night until they are satisfied with their work. They realize that real creativity involves combining both fun and hard work.

They Are Extroverted and Introverted

While we often fall into the trap of categorizing people as solely extroverted or introverted, creativity requires combining both of these personality types – making creative people ambiverts.

They are both expressive and withdrawn, sociable, and quiet. Interacting with others can generate ideas and inspiration, and retreating to a quiet place allows creative individuals to fully explore these sources of creativity.

They Are Realistic Dreamers

Creative people like to daydream and imagine the possibilities and wonders of the world. They can immerse themselves in imagination and fantasy, yet remain grounded in reality.

They are often described as dreamers, but that doesn’t mean that they live with their heads in the clouds. Creative types, ranging from inventors to artists to musicians, can come up with imaginative solutions to real-world issues.

READ ALSO: Top 10 Signs That Shows You Are Mentally Strong.

Their Minds Never Slow Down

An average person’s mind eventually stops thinking of ideas, unknown scenarios, and possible outcomes – and they are more likely to rest easy at night. But a creative person’s mind never slows down. In fact, creative people have been known to complain about this phenomenon!

Creativity appears at random times of the day, and often during the night. Thus, creative people have a hard time getting to bed. Many of the most famous writers, musicians, and actors are up to working during the late hours of the night. Their brains simply refuse to shut off.

Creative people tend to be naturally motivated meaning that they're motivated to act from some internal desire, rather than a desire for external reward or recognition.

Psychologists have shown that creative people are energized by challenging activities which are a sign of intrinsic motivation and the research suggests that simply thinking of intrinsic reasons to perform an activity, may be enough to boost creativity.

Creative people choose and become passionately involved in challenging problems that provide a strong sense of power from the ability to use their talent.

They Are Objective About Their Work

Being passionate about something does not necessarily lead to great work. Imagine a writer so in love with his writing that he is unwilling to edit a single sentence.

SEE ALSO: If A Woman Has These 15 Qualities Never Let Her Go.

They Have Difficulty Staying On Task

While a creative person has much to offer the world, it can be hard for them to focus on one task at a time. This is because so much new information is being processed in their minds at once.

Many creative people suffer from add, and it’s not hard to see why. It can be difficult for a creative person to focus on one thing when there are new ideas constantly flooding their brains.

They may also find it hard to finish long projects. Instead, they would much rather focus their attention on developing something interesting and new.

They Often Use Procrastination As A Tool

Creative people are notorious procrastinators because many do their best work under pressure. They will subconsciously, and sometimes purposefully, delay their work until the last minute – simply to experience the rush of the challenge.

They Lose Track Of Time

Creative types may find that when they're expressing themselves, they get “in the zone,” or what's known as the “flow” state which can help them to create at their highest level.

Flow is a mental state when an individual transcends conscious thought to reach a heightened state of effortless concentration and calmness. When someone is in this state, they're practically immune to any internal or external pressures and distractions that could hinder their performance.

It should come as no surprise that creative people are deep thinkers. They internalize their thoughts, dive deep into philosophical questions, and want to get to the root of everything.

Creative people are intelligent and become knowledgeable about religion, politics, niche subjects, and the meaning of life in general. They tend to use their deep thoughts and the inner-most workings of their mind for inspiration for their work.

They Are Conservative, Yet Rebellious

Creative people are “out-of-the-box” thinkers by definition, and we often think of them as non-conformist and even a little bit rebellious. But it is impossible to be truly creative without having first internalized cultural norms and traditions.

Creativity requires being both conventional and unconventional. This means being able to appreciate and even embrace the traditional, while still seeking new and improved ways of doing things.

Creative people can be conservative in many ways, yet they know that innovation sometimes means taking risks.

They Are Highly Sensitive

Perhaps this trait makes them feel the most misunderstood. Creative people run differently than others, often fueled by emotions rather than logic. In fact, throughout most of the day, they make decisions based on how they feel in the moment, or what their intuition tells them. They get hurt easily and often draw inspiration from their pain.

Creative people can go from joyful to melancholy in a matter of seconds. Because they feel so deeply, everything affects them to the core of their soul, and they live in a world run by emotions and feelings.

Logic makes little sense to them, and they must endure the waves of emotions that run through them because they have been wired to do just that. They don’t bottle up their feelings instead they allow their work to provide them an outlet to express themselves.

They Need A Creative Space To Call Their Own

No matter what type of creative work it is be it writing, drawing, building, playing music, or anything else – all creative people need an inspirational nook to work in.

They may find their flow in their room at home, in a studio, or perhaps in the branches of a tree in the backyard. Whatever space they work in, it needs to feel conducive to creativity – and ultimately, inspire them to turn their thoughts into reality.

SEE MORE: 15 Things You Should Never Apologize For.

They Turn Life's Obstacles Around

An emerging field of psychology called ‘post-traumatic growth’ is suggesting that many people are able to use their hardships and early-life trauma for substantial creative growth.

Specifically, researchers have found that trauma can help people to grow in the areas of interpersonal relationships, spirituality, appreciation of life, personal strength, and most importantly for creativity seeing new possibilities in life.

Many of the most iconic stories and songs of all time have been inspired by gut-wrenching pain and heartbreak and the silver lining of these challenges, is that they may have been the catalyst to create great art.

The standard 9-5 workday doesn’t really vibe with creative individuals. They create when it strikes their fancy, and don’t appreciate a boss telling them when and what to do, why they need to work faster, and so on.

Creative people have a strong independent streak and thrive doing the freelance type of work.

They Sacrifice A Stable Life

While creative people may have a yearning to build a life and put down roots, they know that there’s always a chance that their lives could be uprooted at any moment.

Because they do not follow a set path, they have to be consistently open to saying YES quickly and without reservation. They have to be willing to uproot their lives in order to follow the inspiration or the opportunity whenever it comes up.

They Never Give Up

Creative people do whatever it takes to make things work even when they fail when they’re being their own worst critic when they are running out of ideas when they are not finding inspiration.

They still fight for it and try to find it. They don’t give up on their dreams, and they are not afraid to do it all over again. Highly creative people thrive in their own world which makes much more sense to them than the reality we live in.

READ MORE: Top 10 Signs That Shows You Are Mentally Strong.

If you know a creative person, you’ve probably gotten frustrated with their unique quirks and tendencies they run on these oddities that others perceive as strange and nonsensical but, because of their personality and how they look at the world, they are able to create beautiful masterpieces out of seemingly nothing.

What do you think about 18 Traits of Highly Creative People? Are you a highly creative person, or do you know someone like this? If you are one, what do you find the most challenging?

Let us know in the comments below!

If you enjoyed this article help it reach others. Share it with your friends, so we can keep writing more of them. Subscribe to our newsletters/notifications to receive the latest gossips and news updates on your device as soon as we publish them.