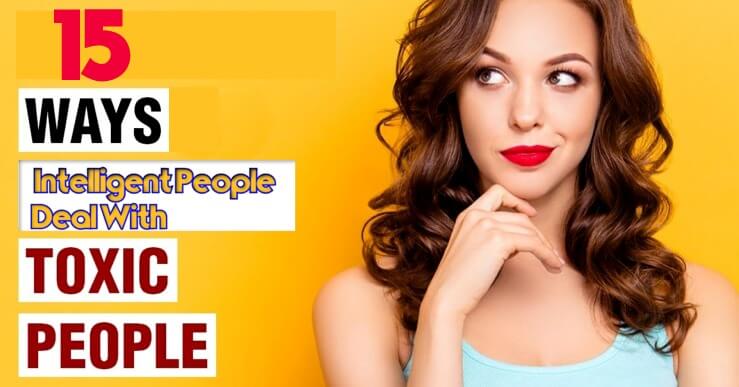 Toxic people always seem to cause unnecessary drama. They’re often the driving force behind a conflict, they drive down morale in the workplace, and they negatively impact the emotional well-being of those who have to deal with them.

15 Ways Intelligent People Deal With Difficult And Toxic People | Toxic people always seem to cause unnecessary drama. They’re often the driving force behind a conflict, they drive down morale in the workplace, and they negatively impact the emotional well-being of those who have to deal with them.

Some are blissfully unaware of the negative impact that they have on those around them, while others seem to derive satisfaction from creating chaos and pushing other people’s buttons.

The worst part is, that it can be tempting to give toxic people the same treatment they give to others.
Of course, this never works. They aren’t capable of much self-reflection, and turnabout only makes them see themselves as victims.

READ ALSO: 15 Signs You Have A Strong Intimidating Personality.

The best way to deal with difficult people is to use the following techniques, commonly practiced by intelligent people.

Complainers and negative people are bad news. They wallow in their problems and they want others to join in so that they can feel better about themselves. People often feel pressure to listen to complainers
because they don’t want to be seen as insensitive or rude. But there’s a fine line between lending a sympathetic ear and getting sucked into their negative emotional spiral.

You can avoid this only by setting limits and distancing yourself when necessary. Just think of it this way: if the complainer were smoking, would you sit there all day inhaling the second-hand smoke? Probably not. You’d distance yourself, and you should do the same with complainers.

This is the area where most people tend to sell themselves short. They feel that because they work or live with someone, they have no way to control the chaos this couldn’t be further from the truth.
Once you’ve found your way to rise above a person, you’ll begin to find their behavior more predictable and easier to understand.

This will equip you to think rationally about when and where you have to put up with them, and when you don’t. If you let things happen naturally, you are bound to find yourself constantly embroiled in difficult conversations. But if you set boundaries and decide when and where you’ll engage a difficult person, you can control much of the chaos.

SEE MORE: Top 10 Signs That Shows You Are Mentally Strong.

Ignore In Some Cases

Now, before you put this strategy to work, consider a few factors. You have to learn the dynamics of ignoring a toxic person. A toxic individual craves attention all the time, even when it’s an occasion to celebrate another person or their accomplishments.

They will get loud, and they will interrupt other people. That said, if you choose to ignore them, make sure there are plenty of other people around, because sometimes, if you’ve been submissive to the toxic person for a long time, and you find yourself alone with them, then ignoring them will not work.

You can only ignore toxic people when you are in public because in public they tend to hide aggressive retaliation, so they are less likely to become angered for being ignored.

Toxic people will share deep secrets with others just to seem momentarily interesting, and they will frequently judge or gossip about people behind their backs. If you meet somebody who does this, do not be fooled into thinking that they are gossiping with you because they like you or trust you. They will just as easily betray your trust. Toxic people will often talk to you about someone, in the hopes that you will agree with them.

Then, they will go and tell the other person what you said. This creates friction between two people, leaving the toxic person in control. It’s a divisive and manipulative method of gaining friends or power in a social group, don’t fall for it.

Toxic people love to insult others, and they do this in a subtle way. People like this will attempt to disguise insults with compliments. They will say things like “I’d never have the confidence to wear that.” Or “You do well when you try”. Although these may sound like kind statements, they are dropping little seeds of doubt in your mind by putting conditions on your capabilities.

Learn to hear the truths behind the veil of compliments, and then ignore them. You will know you have grown when you actually laugh at what they say. But just be careful, because laughing tends to make them angry.

Allow Liars To Trip Themselves Up

Toxic people will often lie compulsively, not just to others, but to themselves. They will often perform mental gymnastics to convince themselves that their lies are reality. Recounting a true event is relatively easy, but lies are actually very hard to keep up. Keeping track of a bunch of made-up stories is difficult, and liars end up exposing themselves over time, by contradicting themselves with other lies.

Toxic people use pity, as another form of manipulation. They even make their victims feel bad for finally standing up for themselves. Intelligent people are able to recognize self-pity and the unique way that it’s used by toxic people. I’m not saying that it’s horrible to feel sorry for yourself at times, but what I AM saying is that toxic people use this as a way to regain control.

They will continue to blame others for all the issues in their life, as long as there’s someone willing to listen to them. Avoiding self-pitying people and refusing to justify their apathy will stop you from being sucked into their world of self-perpetuating failure.

Stand Up To Bullies

While most decent people will help the helpless, defend the vulnerable, and assist those who need it, toxic people prey on anybody they consider to be weak. It could be somebody who’s a little shy, socially awkward, or even somebody who lacks physical prowess.

Toxic people will bully and take advantage of anybody who they think won’t stand up to them, which is why it’s so crucial to stand up to bullies not just for yourself, but for others around you. Standing up to bullying is perhaps the most important way of handling a toxic person.

You can’t stop someone from pushing your buttons if you don’t recognize when it’s happening – maintaining emotional distance requires awareness.

Sometimes you’ll find yourself in situations where you’ll need to regroup and choose the best way to move forward. When it comes to dealing with a toxic person, it’s very important to assess and know your emotional state. This way, if you are really on edge, you can avoid contact rather than being pushed into a reaction that you will regret.

Focus On Solutions, Not Problems

Toxic people are often the first to place blame when something goes wrong. They do this to free themselves from having to make any effort to right the wrong. It’s very easy to hate the stuff and blame people, but it’s much harder to make changes.

Intelligent people will dodge the power of a toxic person by looking for a solution to a problem, rather than just focusing on the guilty party. When you help to make something right whether you had anything to do with it or not, it shows that you are compassionate, protective, and loyal and this will always beat toxic people.

Sometimes you absorb the negativity of other people. There’s nothing wrong with feeling bad about how someone is treating you, but your self-talk can either intensify the negativity or help you move past it.
Negative self-talk is unrealistic, unnecessary, and self-defeating. It sends you into a downward emotional spiral that is difficult to pull out of. Make a conscious effort to avoid negative self-talk at all costs.

It’s important to develop a strong support network of loyal and trustworthy people. Intelligent people know that they don’t have to be everybody’s friend, and not everybody is deserving of their friendship.
In turn, they reward their friend’s loyalty and trust by showing that it works both ways. True friendship and fidelity are one of the rarest and most valuable commodities you will ever have in life, so don’t allow this to be corrupted by toxic, negative, and untrustworthy people.

SEE ALSO: How to Gain Weight The Quickest and Safest Way.

Some toxic people have a need to start a conflict with anybody who is willing to accept their invitation to argue. Even worse, there is often no point in the arguments that toxic people start. There is no desire to have a healthy debate or to come to a consensus and intelligent people are quick to recognize this. Your best response is to simply disengage or to ignore the attempts altogether.

Toxic people can be very distracting. They can cause you to lose mental and emotional focus when they create drama or cause problems. Do your best to shake it off.
Instead, keep steering things back to your goal, or the problem that needs to be solved. Toxic people are many things, but most of them are not stupid, and once they realized you are unaffected by them, they will typically back off.

Remember The Right To Be Happy

It is fully within your rights to be a happy person who associates with emotionally healthy people – regardless of whatever reasons a toxic person has for their behavior. While it’s nearly impossible to ignore what others think of you, you don’t have to compare yourself to others, and you can always take people’s opinions with a grain of salt.

This way, no matter what toxic people are thinking or doing, your self-worth comes from within. Dealing with toxic people is something we all have to confront in our lives from time to time.
These individuals seem to find a way of worming their way into people’s lives and creating drama and chaos in order to manipulate others to suit their needs.

ALSO READ: If A Man Has These 15 Qualities Never Let Him Go.

But, you don’t have let them ruin your life and hinder your progress!

Implementing these techniques will allow you to handle difficult and toxic people more effectively, and decrease the likelihood of their ill effects on you.

What do you think? How do YOU deal with difficult and toxic people? Let us know in the comments below.

We would like to know what you think about 15 Ways Intelligent People Deal With Difficult And Toxic People. Share with us your opinions in the comments section below.

Do you love this article? Subscribe to our newsletters and notifications to receive the latest music video and news updates on your device as soon as we publish them. Share this article with your friends, families, and loved ones to help it reach others on the various social media platforms. Thank you!